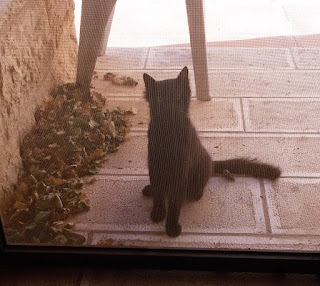 When I was a girl, we grew up with cats named Horatio P. Worthington and Thadeus P. Morley. I can't remember how much input we children had in the names. Maybe my mother made them up entirely, and our job was mere life-long memorization and appreciation. Maybe it was a group project. In any case, the mesora stuck, with the usual generational tweaks. After all, post-1960, you can't give a cat the initial "P" for "Pussycat" with a straight face. Such is the tragic usurpation of language by the prurient. But I digress -- and the chow line is forming.

Outside my door awaits Winston Katrick O'Boogie IV for his bowl of Friskies, augmented by Shabbat leftovers. Crouching on the artificial grass some meters away, looking abused and resentful, Mrs. Efluvia Katharine Hissinbottom, aka Hissbutt, waits her turn. Nearby scamper her progeny: Stop, Drop and Roll. They will not be permitted indoors. They are being paid in advance to hang around outside.

During our first five years in Neve Daniel, we were relieved (especially after life in rat-infested Baltimore) to meet nary a rodent. Cats crept everywhere -- but the trade-off was fine with us. In year six, something or someone killed off all the local feral cats... and in the space of a few months, I had the unpleasant duty of catching in my home and killing two mice and one rat. (My manly men were incapacitated by squeamishness and unwarranted rodent compassion. You should have heard the existential angst!) Little by little, cats tentatively reappeared, and I have done my best since then to employ them with bits of leftover fish and chicken.

My son is sure that I will become the local cat lady, inviting into my home dozens of Snowballs and Mittens and Fuzzywuzzys. Nope. Not happening. The best my greedy grimalkins can hope for is a little steady grub, and to be greeted by a classy name.

I think Mama is smiling in Heaven, happy that I take pride in folding towels like she did, that I teach people to peel mushrooms the way she taught me to, and that I name cats with cat-tail long and equally crooked honorifics.

There are goodhearted people in your community who make it their mission-of-kindness to round up cats and cart them off to the ASPCA for neutering and shots. Find them, join them, and keep the rats away while keeping the feline population at a healthy level.

The title is offered without any particular apologies to T.S. Eliot. He's dead; and in any case, he wasn't particularly fond of my kind of cat.