During the Worst of Times, the Best of Times: Live Like You Were Dying

On the non-Jewish calendar, today is my 61st birthday. 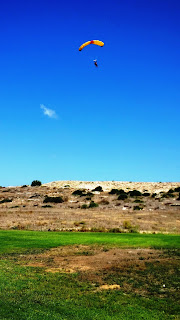 Last week was the saddest of times. The 45-year-old father of four, Ari Fuld, Hy"d, was murdered. While grocery shopping. For being a Jew in the Holy Land. I cried a lot during Yom Kippur, for a young widow and four orphans. I cried for a Jewish people who had lost a hero, a man whose passion for Israel, for the Jewish people, for Zionism, for teaching Torah, was unquenchable and inspirational to countless people around the world. He was also a teacher of self-defense to men, women, and children. And my heart broke for them: if the Lion of Zion could be taken down, who couldn't be? Who could feel safe at a shopping center ostensibly designed to show the world that coexistence is possible, when some shoppers believe that it's okay to stab a man in the back?

But from the little that I personally knew of Ari, I believe the best tribute I can give him is to continue living. In Israel. Proudly Jewish. Proudly Zionist.

My sons arranged for the best birthday present I have ever received, and a wonderful tribute to LIFE. They took me skydiving.

This was actually the bachelor party for my son that was postponed due to weather. (He's been married for just over two years. Spoiler alert: marrying her was a great idea.) Dani told his buddies that this was the day to give it another go, and that they'd have one more attendee. While none of my other sons could participate due to the demands of work, they paid for my ticket, sent supportive comments throughout the day, and cheered at the end as if Moms had climbed Everest.

I had a great crew, including my youngest son and my Dearly Beloved (who chose to play the role of ground crew, since he doesn't believe in jumping out of moving vehicles at 11,000 feet in the air). One a kid I've known since he was born. Another, my son's brother-in-law. The last member of the crew is one of our star football players, whom I will miss very much. Until he can't handle the sidelines any more...)


Paradive in Haifa is staffed with people who clearly love their work. First, young ladies with great senses of humor had us fill out the usual "if you die or are badly injured, don't blame us" legal paperwork. (All jesting aside, they really are careful to make sure you are not jumping into the deep end, so to speak, without knowing the dangers.) Then they showed us a promotional/instructional video. There was constant briefing to be sure we knew what to do and when to do it, and what not to do. The instructors/guides were calm and patient, and fun.

My guide was a very respectful fellow named Arnon. He was a great teacher, giving information and encouragement as needed. He taught me how to twirl the parachute so that it was like a wonderful aeronautical waltz. We had a very pleasant flight over the teal-blue of the Mediterranean Sea. Arnon didn't seem to mind when I chattered joyfully about the amazing world of beauty God has created for us to enjoy. 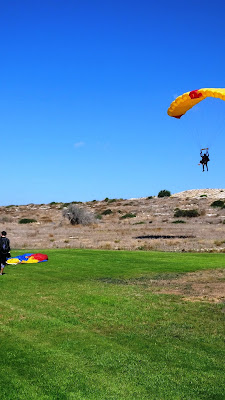 We all discussed post-experience how we felt. What were you feeling when you jumped out of the plane? Which did you like better: the free-fall or floating under the open parachute? (I couldn't decide. Like steak and red wine, each has its contribution to the total adventure.) Were you scared? How did you handle the moment the chute opened? Would you do it again? (If money were no object, a few of us at least would have gotten back in line.) "I think I'm seeing the fifteen-year-old mom," said Dani, with a grin.

None of us could stop smiling (except for the few moments during which we composed the #toocoolforwords gangsta post-flight photo). I'm still grinning.

You can do a lot of things on your 61st birthday. 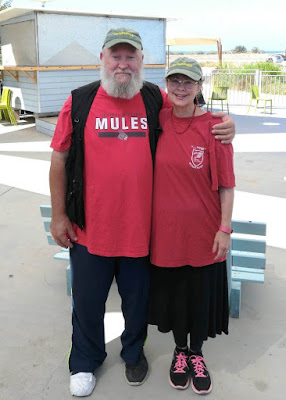 You can hang out with your best friend. 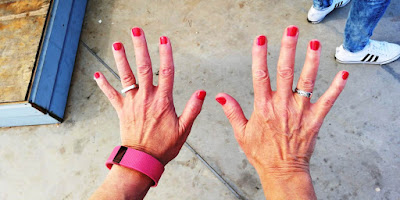 You can paint your nails red. (I recommend it.)

You can also go skydiving. Now I need to go 2.7 seconds on a bull named Fu Manchu...

Moms - not a typo. One of my frighteningly large array of nicknames.

The title (to those for whom it isn't apparent) is a mashup of  Charles Dickens' A Tale of Two Cities (from 1859) and Tim McGraw's song released in 2004, just to display the broad palette of inspiration out there in history.
Posted by rutimizrachi at 19:22