Mental Gymnastics and the Holy Shabbat

Years ago, when the boys were young, we played board games or card games on Shabbat. It was a great way to spend the long summer days and made wonderful family time. My sons were competitive, a trait they inherited from their dear father. Their wizardry with reinventing games, rewriting rules, and creating their own games still astounds me. The games were never boring. But how to keep score, when you couldn't write things down on this very holy day? 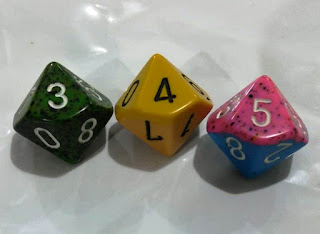 One of the boys came home from yeshiva with the idea of bookmarking page numbers in books. No writing, and scores were logged. This was later replaced by the many-sided dice that came with role-playing games. Give each person three dice, and scores into the hundreds could be tallied. Oh these ingenious Jews...

This clever device has been extrapolated to fulfill other Shabbat needs met so easily during the week with pen and paper or keyboard. You know how you only remember certain things on Shabbat? When you can't write yourself a note to take care of it later? God has such a witty sense of humor... Well, He created us, and He gave us the gift of innovation. 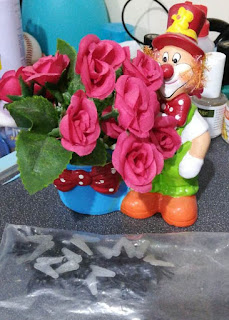 Later in the day, it suddenly occurred to me that a friend had written a really lovely note to us about an interview the Dearly Beloved had given about American football in Israel. I had shared it with the Dearly Beloved, and we had both enjoyed it -- but to my chagrin, I realized that I had never responded. The email must be nearly two weeks old! Not wanting to risk forgetting again, I placed a clown decoration near the flies. Why? Because the clown would remind me that I owed a response to our friend -- a medical clown.

The human mind may be fallible. Jewish law may be challenging. But with God's help, we can always come up with ways to keep the rules, and still remember what we must do for the other six days of the week and for our commitment to our fellow man. I like to think that God approves of His children's efforts to keep His rules while using the creativity He gave them.

Shavua tov! What memory tricks work for you when you can't use pen and paper?