I am planting for my children 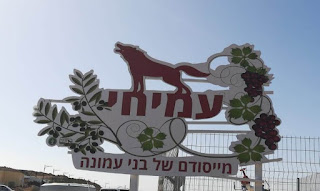 "May your roots go deep while your branches reach toward Shemayim." -- Rabbi Yaakov Yitzchak "Jay" Novetsky of Michigan

While the sage Choni was walking along a road, he saw a man planting a carob tree. Choni asked him: “How long will it take for this tree to bear fruit?” “Seventy years,” replied the man. Choni then asked: “Are you so healthy a man that you expect to live that length of time and eat its fruit?” The man answered: “I found a fruitful world because my ancestors planted it for me. Likewise, I am planting for my children.”

One of the most heartbreaking aspects of life in Israel is watching established communities or homes destroyed in pursuit of an elusive peace. Or destroyed punitively in a property dispute, as if monetary compensation -- you know, the way the rest of the civilized world handles such matters -- simply isn't enough. Moved by the plight of the residents of communities such as Amona, Ofra and Kfar Tapuach in the Shomron, and our own neighboring village here in Yehuda, Netiv HaAvot, Zipporah decided to do something with her own hands to protest the destruction of her fellow Jews' homes. Her bat mitzvah project was to plant 72 trees -- one for each destroyed home in those four communities -- at the entrance to the new yishuv of Amichai, where the displaced residents of Amona will live. 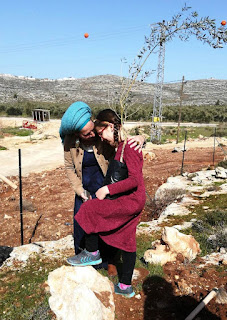 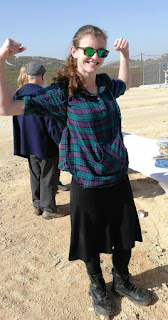 While the whole family gave its blessing in a heartfelt video at Zipporah's bat mitzvah celebration, Mrs. Shannon Nuszen, Zipporah, and her sister Samantha were the only members of the clan who were available this sunny Tu B'Shvat to actually participate in the planting.


I appreciated Sam's usual sense of humor. "Mom would never let us dig holes in the ground in Houston. But here, we get to dig holes everywhere to our hearts' content!" 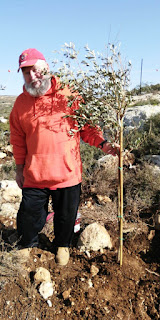 There were speeches from the rabbi of Amichai and other members of the community, most of which were in Hebrew (so I could only understand the gist of the message). One resident, Manya Hillel, gave a lovely talk in English, quoting an old Chinese saying reminiscent of our own Jewish story of the man who plants a fig tree: "The best time to plant a tree is twenty years ago. And the second best time to plant a tree is today."

Manya spoke about the trees planted twenty years ago, with all of the hope that planting entails, and the tragedy of having those trees violently ripped away. "One day, maybe twenty years from now, you will be able to come to Nuszen Park here in Amichai... and tell your children about when you planted trees here, and perhaps pick some olives."

People came from throughout the Shomron and Yehuda (Judea and Samaria) to participate in planting trees, which is considered one of the special mitzvot when dwelling in the holy land of Israel. It was cathartic to "get our hands dirty," to feel like we were doing something positive toward ameliorating a terrible situation. No, of course, the problem will not be solved until we choose sovereignty over poor political band-aids, and until our legal system is restructured so that property disputes are solved financially rather than destructively. But in the meantime, we build. 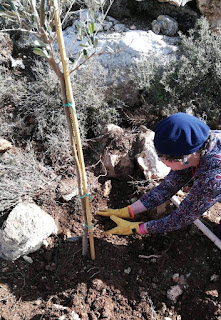 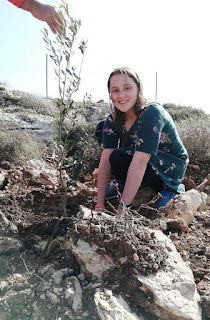 Women, men and children worked and dug, gently settled young saplings into new nests, lovingly placed fragrant soil around their roots to give them a safe home in holy earth.

There was energy here, and hope, and a quiet defiance.

Most admirably, people who had been displaced came to support the project. The presence of Rabbi and Anita Tucker gave us all a lot of strength. Trees were planted by residents of Ofra and Netiv HaAvot. I complimented them on not sitting around feeling sorry for themselves -- which would be completely understandable! -- but instead coming to be supportive of their brethren. 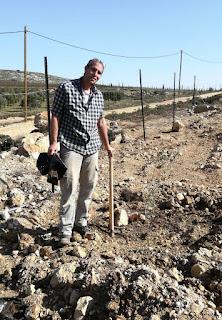 "We're all family," said David Den Heijer, a resident of Netiv HaAvot whose home was recently destroyed for the sake of a meter of disputed space. 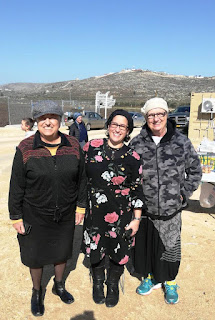 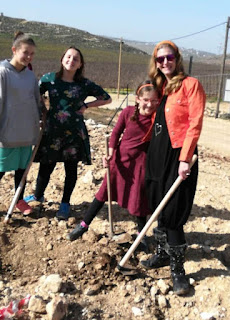 How do you fight darkness and the destruction of your people's homes? 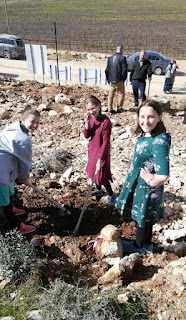 I admire that the accepted Jewish way is not to meet destruction with violence, but with planting, creating, building, bringing new life.


On our way home, we and our South African friends, Razi and Chaya Baruch, decided we should make a pilgrimage every twenty years to visit "our trees." With his typical pragmatism, the Dearly Beloved recommended we drop by every five years. It was agreed, and now it's a date!
Posted by rutimizrachi at 17:52