"Remember, I pray Thee, the word that Thou didst command Thy servant Moshe, saying, If you transgress, I will scatter you abroad among the nations: but if you turn to Me, and keep My commandments, and do them; though your outcasts be at the utmost parts of heaven, from there will I gather them, and I will bring them to the place which I have chosen to set My name there."
-- Nehemiah 8-9

Imagine spending generations reading these words, and believing that the prophet Nehemiah was speaking directly to you and your people! And then finally coming home, on "the wings of eagles," to "Yerusalem"...

Fascinated with a story I heard about the first Ethiopians to "come Home" to Zion, I have wanted to experience the Ethiopian holy day, Sigd, for most of the decade that I've lived in Israel. Work, weather, and my general shyness prevented it, until last Thursday.

The OU Israel Center arranged a morning tour of various sites integral to the exploration of Sigd, which means "prostration" in Ge'ez, the holy language of both Jews and non-Jews in Ethiopia. Our very competent and entertaining young guide was David Bratspis. ("Go ahead. Just get right into the pronunciation. Don't hide from it: brats' piss.") His self-effacing humor and factual research made him easy to like and respect immediately; and his presentation throughout the day didn't disappoint. 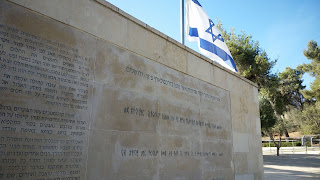 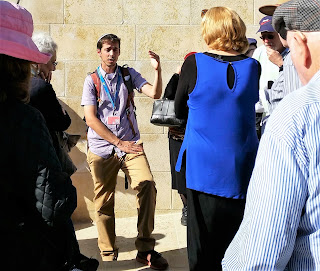 Our first stop was the cemetery on Har Herzl, where David introduced us to the memorial commemorating the loss of more than 4,000 Ethiopians who died en route and in Sudan on their way to the Holy Land in the 1980s and early 1990s. They succumbed to famine and disease; but they also were robbed, raped, and murdered by people they trusted as guides. Happily, many thousand Ethiopians -- also known as Beta Yisrael -- were rescued during the airlifts (designated Operations Moses, Joshua, and Solomon) from 1984 through 1991.

Sitting at the monument, we listened raptly to David as he told us the history of Ethiopian Jewry, facts about the three key languages among the people, and details about their dwellings (a thatched, conical hut called a tukul), and their practices, many of which were decidedly Jewish in nature.


David reminded us that it might be more appropriate to call this day (29 Cheshvan, fifty days after Yom Kippur) "Yom Sigd" rather than "Chag Sigd," as it is a holy day of commemoration, and half-fast, and a very solemn day of blessings and prayers. David pointed out that Sigd became an official holiday in 2008.
After our educational visit to the Har Herzl memorial, we re-boarded our bus to head for the Tayelet, a promenade located in Talpiot, and the highest point in Jerusalem. Their holy leaders, called kessim, chose the Tayelet to continue the practice of a mass pilgrimage to the highest available point, and gazing toward Zion.

From the Tayelet, they worshipers can see the Temple Mount and the Old City of Jerusalem. The Ethiopian practice is to join with their kessim, rabbis, to recite prayers, to read from their holy book called the Orit.

At least this is the practice of some. "What proof do we have that the Ethiopian Jews are authentically Jewish? Some of them (mostly Amharic speakers) hold by going to the Tayelet, to continue the old practices; and some of them (the Tigrinya speakers) wouldn't be caught dead there, and go instead to the Kotel." After we all had a good laugh at the classic joke (two Jews, three opinions), David told us that many Tigrim do join the observance on the Tayelet. But his humor served to remind us that these Jews are part of our family, something we continued to learn and feel throughout the day. 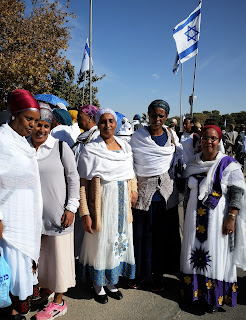 At the Tayelet, we were "turned loose" to walk around, take photos, make conversation. I met lovely people who were more than willing to talk about the day, about their families, about their profound love of Israel. 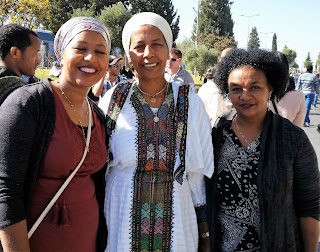 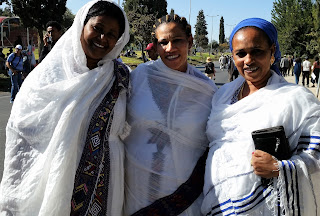 Some of the ladies were shy at first to be photographed; but after I explained that I write a blog to share what is lovely about living in Israel, they were interested. Once I expressed my happiness in being able to participate in this holy day, they were eager to talk. We discussed how special it is to share traditions, and the joy they feel bringing up their children in the Israel their parents only dreamed of. 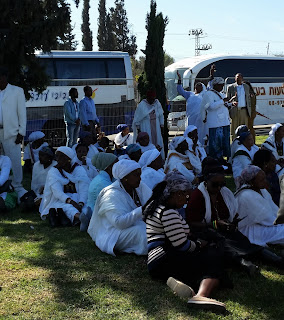 After this visit, we moved to the Kotel, to say the afternoon prayers with our Ethiopian hosts, who then broke the fast over traditional sourdough flatbread called injera, with which they were very generous. They were also very generous with their brachot. I collected abundant blessings from more than one kes for my sons and their families. 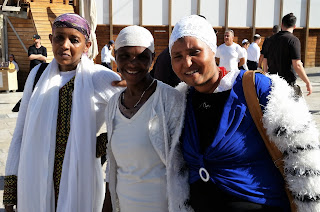 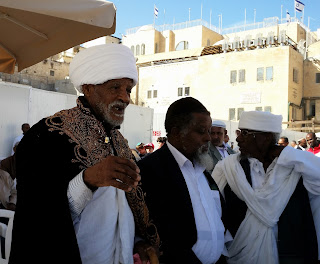 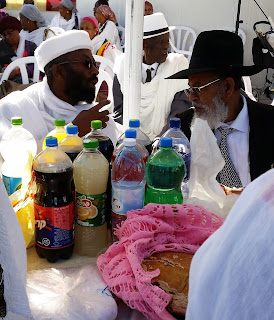 I hope to participate again in Yom Sigd, less as a curious observer and more as a fellow olah, as well as in the many and varied cultural customs of my wonderful Jewish Nation. As my dear and wise Mama, a"h, always said, "Why do people fight about their differences? Wouldn't it be better to celebrate our rainbow of colors and all of our different ways of viewing the world?"

You can contact David on Facebook about arranging a tour at David Bratspis Tour Educator.
Posted by rutimizrachi at 08:14