From Tragedy to a Wedding 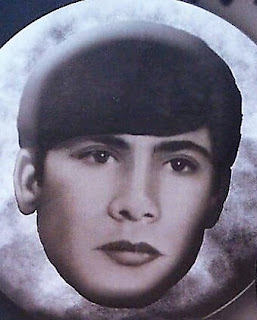 Let me tell you a story. Once upon a time, there were seven brothers and two sisters. Their father and mother brought them up to be fine, responsible men and women. Among other things, all of the boys and girls did their part to serve their country. The second of the children, Itsik, was killed on his way back to his army base in a car accident. He had spent a happy Shabbat with his family; and he and his eldest brother Moshe had really bonded for the first time, as is the way often with brothers born only a few months apart. Itsik was only twenty years old.

The State of Israel gave the parents a monthly stipend after the loss of their son, as it does for all families of soldiers who die while they are on call to defend their country. Since they were getting along all right financially -- not rich, not poor -- Itsik's mother decided to set aside the money. "I will do something special with this money one day, in honor of my son," she said to her husband and herself. Even after her husband died, when their youngest daughter was only 15, she continued to save the money, and saved and saved and saved...

Nearly fifty years after that tragic loss, she commissioned to have a Torah scroll written in her son's honor. 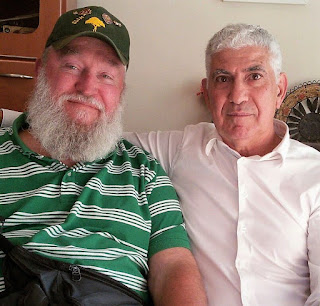 The Dearly Beloved and I were privileged to attend a very special Jewish ceremony. When a Sefer Torah is written, people who are permitted to "write a letter" in the Torah, with the help of a sofer -- a qualified scribe -- have the merit as if they had fulfilled the mitzvah of writing a Torah scroll.

There was something extraordinarily moving about attending this ceremony in Israel. Those honored with adding a letter to the Torah came from many different levels of observance. But every one of them exhibited such respect and love and awe for the Torah, for the rabbi guiding their hands, for the holiness of the moment. On some of the faces, there was complete comprehension of the gravity of the moment. The faces of others were aglow with an almost childlike delight. The rabbi gave brachot, and allowed the hand that had written the holy letters to be reverently kissed. 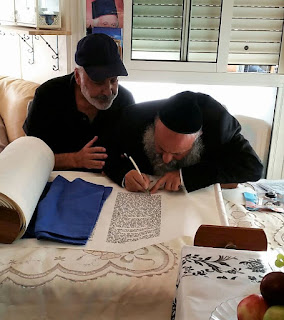 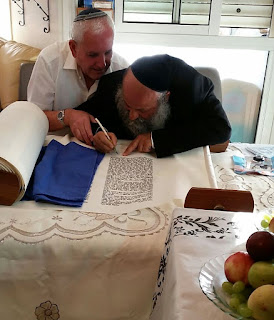 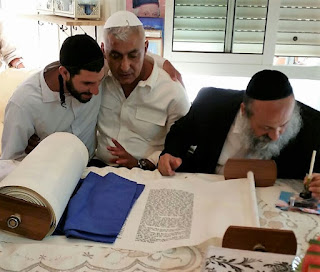 The final honor, the writing of the last letter, was reserved for the bachur (the eldest son), our friend Moshe Torjman. 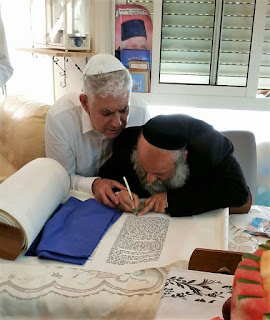 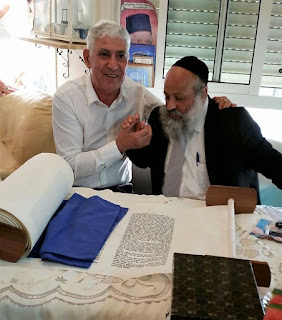 And after the last letter and the last blessings, the dancing was as joyful as at any wedding! 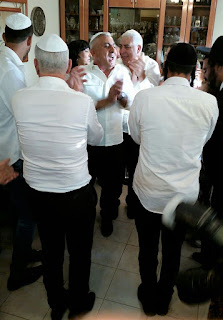 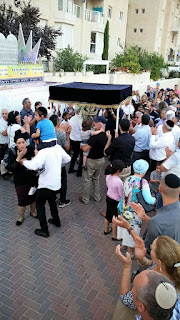 When the Torah scroll has been completed and has donned her finery, she is danced through the streets of the city under a bridal canopy on her way to the beit knesset with much song and revelry.

Everyone met outside Mrs. Torjman's apartment (where I had made a sad shiva visit on the passing of Moshe's father some time before. It was a pleasure to be meeting the family again, but for a happier occasion). To much joyful (and incredibly loud!) music, we paraded with the Torah under the wedding canopy toward her new home in the shul. 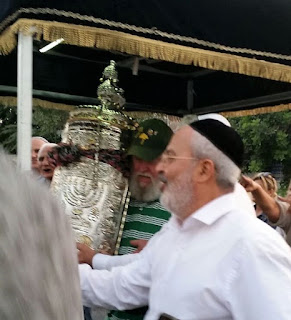 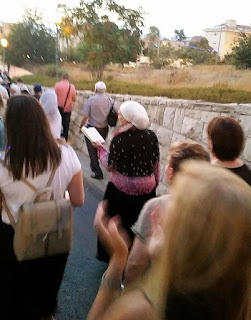 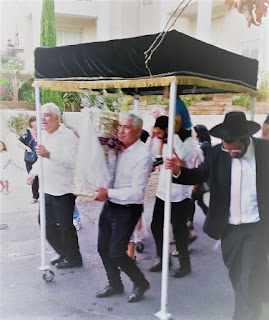 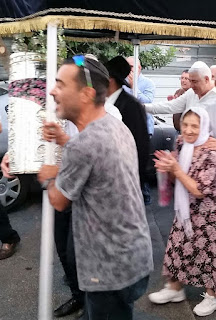 What a joy it was to walk through the city streets of Jerusalem with this exuberant family and their friends, some of whom they had not seen in ten or fifteen years. The Jerusalem police guided and protected the crowd, especially the small children. There was so much happiness! Even the drivers of cars had to be persuaded to move along, as they were happy to sit and "dance" behind the wheels of their cars. The tiny mommy of the family, who had saved all that money to honor her son and other dear family members, is now in her eighties. She walked the entire distance (after dancing with daughters and granddaughters) with a smile on her face.

Once the Torah scroll and her entourage reach their destination, she is met outside the shul by the resident Torah scrolls; and she and they are danced into the holy aron in which they will live together, symbolically marrying the Jewish people yet again to our God. 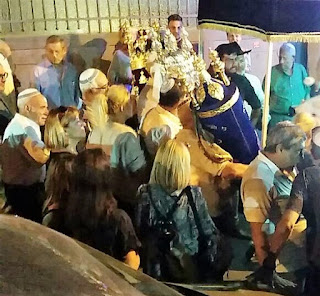 There are many reasons we love living in a small town in Israel, shopping at our local store, and getting to know the people around us by name and by story. May we have long, healthy, happy years to celebrate with each other, and to strengthen each other through our sorrows.

This precious Jewish soul was taken from us by a tragic accident before he could marry. Years later, we all danced at a wedding in his honor.