The One Hundred Shekel PMP 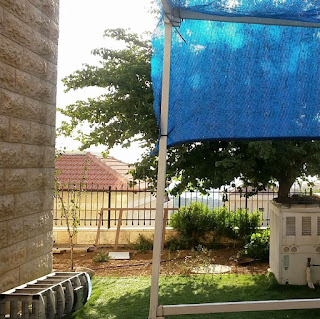 It's summer in Israel. It's HOT. Don't tell me it's hotter where you are. We don't care. We feel we have the right, when temperatures soar to between 34 and 37 degrees Centigrade, to whine. (That's between 95 and a hundred degrees, for those still thinking in Fahrenheit.) Perspective is everything.

This is also true regarding the cost of living. For example, my son Aryeh (known in his youth in these pages as "Stunt Man") fressed routinely at a shewarma place on Agrippas that sold its product for fifteen shekels, well under what was being charged at other establishments. (By the way, he took the parents there on a -- for him -- major spending spree. It was pretty good, especially for the price.) At one point, the owner decided to become more competitive, meaning he attempted to make the same profit everyone else was making. Aryeh (and presumably lots of other customers) stopped dining there. To Aryeh, it was more than just the five extra shekels. "It's the principle." Aryeh is of the impression that no meal should cost more than four bucks fifty, with the tip. Aryeh doesn't eat out often. The shewarma place lowered the price, back to fifteen shek.

So back to the heat, and my immediate comfort. I have this beautiful patio, with a lovely view of the Judean Hills.

"Where are you going on vacation this year?" people often ask me. I take them outside to my patio.

"What are you talking about?" I ask them. "Have you seen this view? I live on vacation!" (Aryeh comes by his frugality honestly. If we can't afford it, we don't do it.)

The problem is that the patio is fully embraced by the blazing desert sun much of the day. When one is not accosted by the great golden orb, it's the wind, for which Neve Daniel is famous. I like wind. But when it plucks your tablecloth, as well as cups, plates, napkins, flatware, off the table, and sometimes takes the table as well, dining on the patio isn't as relaxing as one might desire.

Many people have solved these problems by constructing upon their patios beautiful wooden or metal structures called pergolas. Similar to the gazebos of my youth, pergolas can be covered to subdue the sun, and sided with fabric or wood to ward off the wind. The difficulty is that pergolas can cost anywhere from 2800 shekels to 28,000 shekels. People who eat fifteen-shekel shewarma don't even call pergola companies to ask for an estimate. They sit around chewing their pita inside by the fan, and imagine how nice it might be after dinner to sit for a little bit in the dark on the patio. If the wind's not too bad.

Suddenly -- voila! -- the Dearly Beloved came up with the perfect plan for the Poor Man's Pergola (aka the PMP). He dragged out the metal frame for our sukkah. He purchased (for less than a hundred shekalim -- under 30 bucks, if you're reading from the States) some weather-resistant canvas with convenient holes for the Baltimore handcuffs to go through, and some Baltimore handcuffs. He dragged out some old schach that is no longer fit for the holy week of Sukkot. Without designating it an actual sukkah, my dear husband built me a shelter from sun and wind.

This morning, we sat outside together and talked of many things. The air was redolent with the scents of earth and green leafy life. Thanks to the simple canvas cover, the sun was not oppressive.

Thank you, God, for imbuing this family with resourcefulness to ward off impotent envy, with an attitude of gratitude. Thank you for this ingenious fellow who builds something marvelous, even as he works to make sure that my pergola is not an official sukkah. "I used metal bars for the support of the roof..." -- he does not call it "schach," even though he will call it that in the fall -- "...so Rabbi Goldberger would approve." 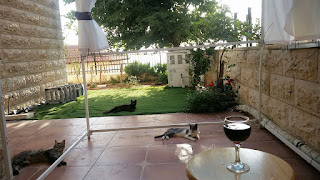 This evening, we returned to the PMP, and enjoyed the evening breeze, the feral "decorator" cats, the impending sunset, each other's company. Bonus: the setting inspired in the Dearly Beloved two excellent divrei Torah.

May we all remember to be grateful for simple solutions and for the privilege to live in this holy, holy Land.

Best wishes for an easy and productive fast. From the Eastman pergola on a mountain in Israel.

Email ThisBlogThis!Share to TwitterShare to FacebookShare to Pinterest
Labels: getting by, getting out of debt, Neve Daniel, pergola, resourcefulness