The Many Perfumes of Mama 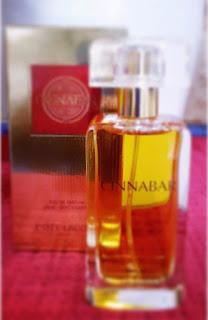 Even though she married a construction worker, there was always the history of pearls and Ming vases (pronounced "vahzez," not "vayses," because that indicated breeding). She was born to be wealthy and finely educated, was my dear Mama... but life circumstances discarded her from those possibilities. Kicked out of home at nineteen with the clothes on her back and fifteen cents in her pocket, she just tried to survive. Irene aka Nana, the vicious great-aunt who raised her, stole her pearls and wore them ill on medication till they were as ugly as paste. I saw the vahz once, when I was thirteen, and wanted to kick it over, just to watch their pretensions crash.

But back to Mama, and that hidden exotic air she recreated with Estée Lauder's Cinnabar... cinnamon and bergamot, sandalwood, cloves, with hints of peach and patchouli. She was all Orient and evenings in a sarong on a stretch of sun-kissed sand beside murmuring blue-black waves. She was a jewelry box of stories, hints of wild love affairs with men who spoke no English and whispered false promises into her hair. And this impression she gave is illusory, because she was none of these things, not outside. She was a frightened girl brought up in a forbidding and crazy Catholic home, abused in too many ways to mention in polite company, married to a second generation Holocaust remnant, followed by a child abuser, followed finally by a man who never got around to appreciating her. She was externally the mother of four children whom she loved and for whom she cooked endless stew, around knitting sweaters and Barbie doll clothes. But her heart and soul were bathed in the freedom and world travel and mystery of Cinnabar.

Mama baked bread. Her sourdough could rival the famous San Francisco sourdough bread, the "mother" in the fridge smelling between bakings drunk from its own bacteria. Her black bread was more Russian than the Russians', full of caraway and beer, dark smells of the healthy diet of the truly poor of the Steppe who ate good natural bread, homemade cheese, root vegetables in season. Her pumpernickel would have made an old Jewish deli owner weep with memories of his childhood, his grandmother's kneading with gnarled hands turning poverty into promise. I felt as if I were in European history as I sat in her kitchen, smelling and seeing a newsreel of lives we had no reason to know.

Her bread and one-pot soups and stews spoke of an upbringing and history she lacked, as if she made herself up out of the European and Russian novels she read. An avid student of world history, an autodidact, Mama taught herself whom to be, how to cook, how to raise children, as she herself was never raised by anyone.

She was very American, was my mother. Born in North Hollywood and raised among the stars. Cary Grant used to drive her home from school. She, the "good girl" of the malt shop gang of movie star wannabes, rode in James Dean's car with him down a precipitous mountain road, because the crowd trusted only her to gauge his true speed honestly. She didn't let them down, reporting accurately the details of their daring flight down that wickedly perilous slide, two weeks before his fatal crash on that same mountain road...

Mama was always the kid in the vicinity of greatness and tragedy who lived to tell about it.

Mama's pumpkin pie, her famous dressing made with apples and bread, sage and cinnamon, smelling like childhood. My baby sister dancing the naked turkey obscenely in the pan, after cradling it, giggling "My baby, my baby..." Caraway seeds on dark brown bread browning to perfection as if to warm up the oven for its really laborious work of crisping the skin of a juicy turkey. Dish-washing liquid smelling of harmonies and laughter. Turkey roasting will always smell of sisters and mother working together to create a savory and sweet masterpiece of family love.

We don't celebrate Thanksgiving anymore, because with the passing of the matriarch, that family has splintered, lost its color, drifted to four corners of the universe, held indecisively together by a shredding thread of Facebook "likes." But those smells will always make me smile and sense a perfectly-harmonized ladies' barbershop quartet of my Mama, Diane and Carol and me, before the meat turned rancid, the pumpkin spoiled, the spices faded into memory's kitchen.

Searching to connect, to regenerate scattered ash, I single-handedly revitalize the sale of a fragrance from 1978, as Estée Lauder pulls Mama's memory from a dusty back shelf. Dabbing reminiscence on my earlobes, wrists, throat, I wrap in the essence of her, all the trampled promise and fairy tale and unconditional love of her.