Hidden Figures: From Disrespect to Dignity 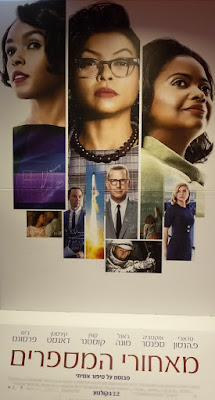 I grew up in a time after the civil rights battles of the Sixties had already been fought by brave people of many colors, standing shoulder to shoulder. Not that the fight is over -- for as long as men believe themselves to be more or to be less than others for any reason other than merit, we have not yet won -- but at least I never saw separate drinking fountains and restrooms separated by color.

There was a black family that moved to my all-white town when I was a little girl. My mother became close friends with Fortha May Fergus (thus named because in a family of many children, she was born on the fourth of May). Among her children, Fortha May's son of my age became my very good friend.

One day, we marched into my back yard, hand in hand, and announced to my stepfather that we were getting married.

"The hell you are!" he roared. I never discovered if it was merely our young age or something else that caused such a heated reaction... but I do know that others drove my "boyfriend" and his family out of our town some time after our ill-received news. Mama said it was because they were Negroes. Neither she nor I could comprehend the reasoning behind this. It would be as illogical as the brunettes driving out redheads or blondes.

On the way home from our date today at Cinema City, the Dearly Beloved remarked: "There are some good movies. Some reach the level of greatness. This was a great movie."

I agreed, though I shook with rage and barely-controlled tears through the last half of the film.

I often see goodness in human beings that makes my heart burst with pride. At too many other times, I think we must make God cry at the tragedy of how we diminish each other, His creation, His children. How can we ever, ever feel superior to another human being, for things over which we have no control? How has it ever been possible, how is is still possible, for one human being to look at another as automatically beneath him, simply due to an accident of birth?

There are plenty of good movie reviewers who will tell you all about this remarkable film, about the fine actors portraying a degraded and degrading time in American history, and how some brilliant people of stunning patience fought the system within the system and won some semblance of respect and dignity. So I won't review the film for you here -- but I will recommend that you watch it, and that you take your children to see it.

God created us all with unique gifts and with defects so that we can all work together to form a complete and awe-inspiring world. If we think for five minutes, we can see areas to admire in another human being, areas in which we ourselves are lacking.

It is my fervent prayer that Israel, saturated as this nation is in the Torah concept that we are all b'tselem Elokim (created in the image of God), will finally decide to lead the world in truly looking not at the jug, but in the wine it contains, as our Sages taught.