Jewish Boy Meets and Falls in Love with Christian Girl. What Next? 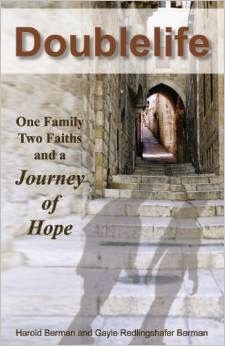 I was intrigued when I first saw the reviews of Doublelife: One Family, Two Faiths and a Journey of Hope. Minister of Music in a Texas mega-church meets and falls in love with nice secular Jewish boy from New York. And somehow they are supposed to work all of this out.

But I had about five books going already -- so I put the thought of reading Doublelife on a way, way back burner.

Then a good friend introduced Gayle to me. After one short phone conversation, I had a strong need to read the book right now.

My first impression is that I like these two people very much. Harold Berman and Gayle Redlingshafer Berman each write well. The device of love letters between them, used consistently throughout the book, is a delightful dance (even though I had to rely on my by now entrenched affection for them both to suspend my disbelief when the letters continued even after they were married and living in one house).

Our two characters are warm, intelligent, frighteningly talented. (An aside: my friend introduced Gayle and me in part because we are both musicians. I chuckled as I read about the classical and operatic music in which these two fascinating individuals immersed themselves... and wondered what they will think of Avi and me with our blues-country-old-time-rock-n-roll level of musicality.)

Gayle and Harold decide to marry, but without rose-colored glasses. They speak openly about the differences in their religious upbringings, their concern about child-rearing across the faith divide, their well-reasoned but still naive belief that love can conquer all.

And then the story gets really interesting, as they continue to write openly and lovingly of the difficult realities life throws into their plans. The largest and most threatening of these is Harold's increasing need to come to terms with what being a Jew means, and their mutual discovery that this is no small matter in the context of their happy marriage. The crises come -- as they often do in marriage -- when the couple is faced with a whiplash series of changes in direction neither of them could have anticipated when they carefully crafted their interfaith wedding ceremony and their subsequent life plans.

I won't spoil the story for you by giving you any more information. Suffice it to say that here are two people we should all aspire to emulate, if we want marriage to work. And if you need to feel the roller-coaster of joy and laughter and tears, Doublelife will give you plenty of opportunities for each.

However the story ends, the friendship and respect between these two fine people causes the reader to cheer them on to a happy ending.

In Israel, you can purchase the books at my personal favorite bookstore, M. Pomeranz Bookseller on Be'eri Street in Jerusalem. Drop my name, please. It won't necessarily get you a discount, but it will make Michael and Shira smile.
Posted by rutimizrachi at 11:00