Proof that Washers DO Eat Socks 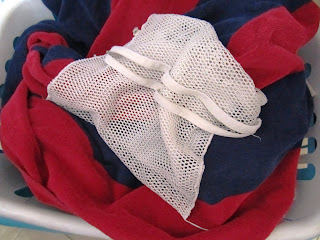 The Hebrew expression of the day is "שקית רשת." A sakit reshet is a net bag. It has a zipper closure, costs less than five shekels, and could have saved me several hundred shekels.

During "Snowfesh Hagadol," the great snowstorm of 2013, not only did the power go out at interesting times, but our washing machine also died, creating a flood that kept me from being bored for several hours during the middle of being snowed in.

Being happily responsible for the laundry of several humans, it was imperative that we get the thing fixed as soon as possible. It was a question of whether it had been used to death, and would need to be replaced, or could be reasonably repaired to limp along for a few years.

We checked the GushPhon Classified Business listing -- a marvelous tool I highly recommend for both residents of Gush Etzion and people anxious to share their skills. There were several entries; and I chose to give a call to Zvika Hershkowitz. (Or Tzvika -- yes, the listing is in both transliterations, like so many other things in Israel).

I no longer worry about silly little things like creating the perfectly fluent Hebrew request for service, as I have found that between my pidgin Hebrew and Yiddish, and their pidgin English, we can usually work out what is the problem. Zvika said he was up to his eyeballs (my phrase, rather than his, as I don't think that expression even exists in Hebrew) with fixing the electricity in synagogues and other crises far more important than my little washing machine troubles. We agreed I would call him later in the week. I called this morning, and he made time to come by.

I asked him what he thought it would cost to fix the washing machine, and incidentally to make the dryer function without roaring us to the brink of auditory insanity. He gave me a reasonable quote up front. This was good. If he'd quoted me an hourly rate, I would have been simmering quietly, as he got perhaps ten calls during his visit. Popular guy. I could see why: As things fell off the walls and into his path, he kept saying "Ain baya, ain baya (no problem, no problem)," very cheerfully. (It's a very tiny room, and storage in Israeli apartments is at a premium.) 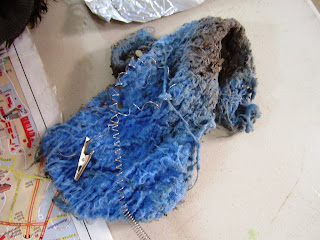 Zvika finished the work in under an hour, explaining the problem in detail (various socks, and something reminiscent of Sixties paraphernalia (I'll speak to my sons about that one...), and how to avoid such problems in the future. 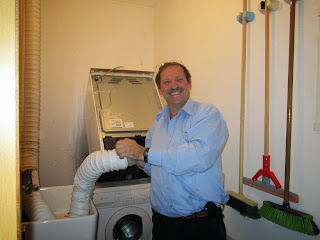 As he cheerfully took my money -- thank God, we had stashed some for just such an occurrence -- he gave me the Jewish mother lecture I have come to expect from every worker in Israel.  Translated: "If you will use a zippered net bag for socks and small items, you can spend the money on that, instead of giving it to me." And, of course, clean out the pockets.

When I asked him how long he thought my washer and dryer might last, he pointed heavenward. "Machar, machartayim, eser shanim... rak Hashem yodea." (Tomorrow, day after tomorrow, ten years... only God knows.) I love frum (religious) workmen for their honest reliance on the One Above.